In Memory of
Lucy Jane Abney
Caldwell
1939 - 2021
Click above to light a memorial candle.
Memorial Candle Tribute From
Newnam Funeral Home, Inc.
"We are honored to provide this Book of Memories to the family."
View full message >>>
Send Flowers
Plant a Tree In Memory of Your Loved One
Click Here
Menu 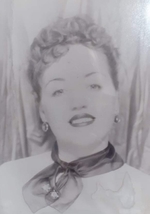 LUCY JANE ABNEY CALDWELL, The widow of the late Jerry Lynn Caldwell and the daughter of the late Hugh and Christa Stella Newman Abney was born in Lee County, Kentucky on October 12, 1939 and departed this life in Jackson, Kentucky on October 30, 2021 at the age of 82 years and 18 days. She was a loving mother and homemaker, as well as a member of the St. Therese Catholic Church and Queen of All Saints Catholic Church. She was faithful to her religion, loving God with her whole heart. She loved sewing and quilting, cooking, her flowers, the outdoors and singing.
She is survived by her three children, Donny Lynn Caldwell and wife Rosetta, Perry Scott Caldwell and wife Annette, and Lana Kay Caldwell Combs all of Beattyville, Kentucky; eight grandchildren, Eric Caldwell of Beattyville, Jessica Caldwell Horn and husband Stan of Irvine, Kentucky, Skyler Caldwell, Megan Burns, Harley Caldwell, Devin Caldwell and wife Tara, Jennifer Caldwell Andrews and husband Ben all of Beattyville, and Emily Combs and fiancé Curtis of Mt. Sterling, Kentucky; five great grandchildren, Katelyn Caldwell, David and Chloe Andrews all of Beattyville, and Kiley Combs and Aubrey Caldwell of Mt. Sterling; one sister, Carol Lynch of Beattyville; and a host of other relatives and friends.
In addition to her husband and parents, Mrs. Caldwell was preceded in death by one brother, Eugene Abney; one sister, Sylvia Kennington; and one son-in-law, Jimmy Combs.
Pallbearers include, Devin Caldwell, Curtis Caldwell, Ronald Abney, Ben Andrews, Michael Gabbard, and Jason Gabbard.