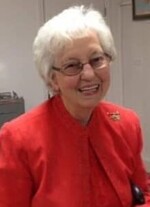 Madge Oliver Cockerham, widow of Samuel C. Cockerham and the daughter of the late Edmond H. and Edna Whisman Oliver, was born in St. Helens, Kentucky on July 23, 1928 and departed this life in Beattyville, Kentucky on November 10, 2020 at the age of 92 years, 3 months and 18 days. She was a devoted member of Beattyville Christian Church, a former teacher, as well as a member of the Lee County Retired Teachers.
Mrs. Cockerham is survived by two children, Samuel T. Cockerham and wife Edna of Beattyville, Kentucky and Deborah Anne Gevedon and husband Hank of Mt. Vernon, Kentucky; two grandchildren, Savannah Thompson and husband Josh of Lavalette, West Virginia and Samuel Graham Cockerham of Villa Hills, Kentucky; one sister, Gladys Oliver of Beattyville; and a host of nieces, nephews, other relatives, and beloved friends.
In addition to her husband and parents, she was preceded in death by one daughter, Karen Sue Combs; three brothers, Herman, Walker, and John Paul Oliver; and four sisters, Anna Laura Brandenburg, Beulah Wilson, Ruth Oliver Smyth, and Verda Marie Rigdon.
Donations suggested to Beattyville Christian Church, Lee County Public Library or to Parkinson's Research.